The Office for Budget Responsibility has predicted that 2022-2023 will see the largest fall in living standards for years. We need to think again about the UK’s Social Security System.

by Robina Jacobson
in Economy, Politics 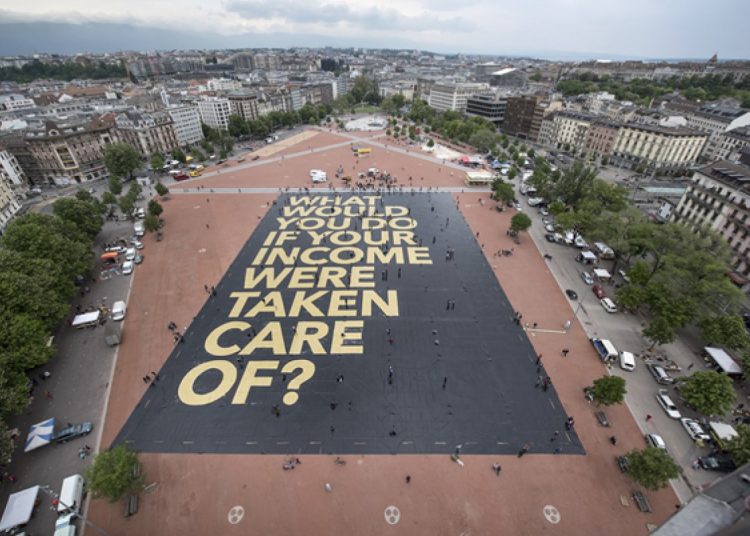 "Weltrkord fürs Grundeinkommen" by Kopf oder Zahl is marked with CC BY 2.0.

The child without a bed in Sheffield will not rise bonny at morn. The teacher who admonished a small boy in rural Norfolk for eating his packed lunch at ten o’clock did not ask, and so did not discover that the boy had eaten no breakfast that morning. The malnourished unemployed man in Paisley who fainted on his way to the Job Centre was ‘sanctioned’ for 13 weeks because he arrived 15 minutes late for his appointment. How can anyone thrive when subjected to this?

In 2014, the Office for National Statistics (ONS) estimated that 1.8 million workers were on contracts which did not guarantee a minimum number of hours. Thereby, a contract of employment might state a 40-hour working week; or whatever the business needs. It might need a minimum-waged employee to be present for 20, or it might want them for 70 hours a week. A person might travel at personal cost to work and be sent home a short time later without compensation for that transport fare.

As energy costs rise, the Westminster government has removed the right to free insulation for the homes of 400,000 disabled people. Their incomes have been deemed too high to receive this benefit, despite many having higher living costs than other sectors of the population who have not the need for extra heating, electric wheelchairs, oxygen equipment or hoists.

The value of UK child benefit has lost 30 percent of its real value between 2010 and 2021. Using the Bank of England inflation calculator and figures from Revenue Benefits the decline becomes shockingly apparent. One economist, in his proposals to address inequality as far back as 2015, included in these an argument for a universal basic income (UBI) for children.

The Office for Budget Responsibility has predicted:

“2022-23 is set to see the largest fall in living standards since Office for National Statistics Records began in 1956-57 … Real incomes have been stagnant since the start of 2019 and this is now expected to continue over the next few years.”

Remember though, that in 1931 Keynes thought we would all “have enough … to lead the good life”, he foresaw us needing to work just three days a week by 2030. When the Beveridge Report of 1942 became the model of the Welfare State, it aimed to provide UK social insurance from “cradle to grave”. While working, all paid into the scheme which rested upon an assumption of full long-term employment. But what we see happening in Britain now is far removed from the virtuous circle of Keynesian economics between the end of WWII and the 1970s, and from the original Welfare State of Beveridge who thought the object of government should be to make possible the “happiness of the common man”.

Instead, what we see is the agonising sadness of families whose jobs are precarious; with wages insufficient to allow them both nourishment and warmth in their homes. For ten years the social security system has been debilitated and the numbers living in poverty have risen. Those not in work are fearful of bureaucrats who patrol the Job Centre, administering the sniping policies of a Conservative Westminster government.

The Commons we have lost in the past half-century

Since the 1980s our Commons, our commonly-held goods have been sold off not because we had no need of them, just for corporate profit; oh, and to make them more efficient. Our water, our trains, our local authorities, our housing, our oil, have all gone and we have had nothing in return. Our private data is extracted, strip-mined without our permission. Our public cultural institutions now have to rely on private donors for purchases and exhibitions, and in education cultural subjects and critical thinking about society have been sidelined by an emphasis on jobs and getting into employment.

Yet, the United Kingdom is one of the richest countries in the world. It is a favoured investment destination for global capital, and disgracefully, this includes the profits of organised crime which have burgeoned on money-lending during lockdown. Who would have thought our government would morph into the pitiless guardian of a Poor Box?

Other places and countries do it differently.  Alaska has shared the profits of its oil through an annual dividend to all State residents since 1982; Iran has had a UBI since 2011; and in 2020 the government in Brazil passed into law a measure to provide a basic income for “up to 59 million low-income Brazilians”, a measure which activists hope will remain a statute. Many countries have created sovereign wealth funds, publicly owned to generate an independent source of funding other than taxation revenue, for the benefit of all citizens.

The highways to create a Sovereign Wealth Fund and, or, a Universal Basic Income are legion. Thomas Paine, in his 1793 publication The Agrarian Justice, proposed a:

“national fund, out of which there shall be paid to every person, when arrived at the age of 21 years, the sum of 15 pounds sterling, as a compensation in part, for the loss of his or her natural inheritance, by the introduction of the system of landed property. And also, the sum of 10 pounds per annum, during life, to every person now living, of the age of 50 years, and to all others as they shall arrive at that age … It is proposed that the payments, as already stated, be made to every person, rich or poor. It is best to make it so, to prevent invidious distinctions.”

Similarly, Professor Guy Standing in 2019 published Plunder of the Commons: A Manifesto for Sharing Public Wealth, in which he argues that our Commons which have no price, have been commodified and that we should be compensated for the loss of them.

In their report published by Compass in 2016, Howard Reed and Stewart Lansley’s Universal Basic Income: An idea whose time has come? explores some of the many schemes to mould our complicated, humiliating and punitive benefits system into one which takes account of discrete-task employment, and the shift in working practices from the days of full-time long-term jobs. The text and appendices of this publication are a rich source of costed possibilities towards an “income as of right” for every citizen, free of conditions.

Of course, there will be objections: poor people are feckless, they should be better at budgeting; rich people are feckless, they waste fossil fuels with their frequent flying off on holiday; why should either be given more? Giving people cash will make them lazy, they’ll drop out of employment. A UBI set at a reasonable level just isn’t affordable. And so on. The words of Beveridge come to mind: “scratch a pessimist and you will often find a defender of privilege”.

Among others, the Geneva-based International Labour Organisation has shown that nearly all economies are wage-led, not profit-led. Countries have slower growth when an excessive share of national output goes to profit, with less going to wages. Spending money in a local economy is good for everyone; it creates jobs and supports local infra-structure. Studies of the Finnish experiment with UBI found:

“the basic income … led to a small increase in employment, significantly boosted multiple measures of the recipients’ well-being, and reinforced positive individual and societal feedback loops.”

Researchers in Iran did not find empirical evidence of a negative effect on the labour market. They noted that younger recipients of the basic income used it to “enrol in higher education they otherwise couldn’t afford”.

To quote Iain Porter of the Joseph Rowntree Foundation:

“There is a level [of income] below which no-one should fall”.

He is right. We can use the wealth of our country to eliminate poverty, this is a choice government can make. Just because something is the way it is, doesn’t mean it can’t change.

For further information and to join the debate on Universal Basic Income: Compass Basic Income Conversation