And that is how I got into Cambridge: no entrance exam, no interview – I just had to receive my brother’s faint approval and pass two Advanced levels. 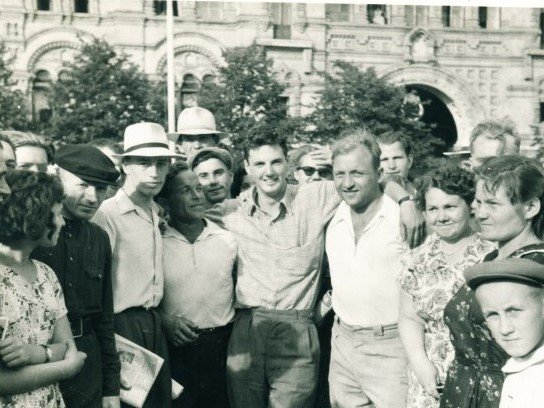 My brother John was at Trinity College, Cambridge so it was assumed that, after my national service, I would follow him there or go to Oxford. My mother, who was the parent who decided such matters, of course thought that she knew about Cambridge but wanted to find out about Oxford. So we went there one day to have a look round. As we were standing on a bridge overlooking the River Isis, we saw a couple of male undergraduates on the towpath walking towards us holding hands. “That’s it,” said my mother; “you’re not coming here!” I have to admit that she was a dreadful homophobe but she was also naïve and it did not seem to occur to her that at Cambridge there would also be homosexuality.

So it was decided that I would follow John at Trinity and that he would speak to his tutor to see whether there would be a place for me.

“Is your brother a good chap?” asked the tutor.

And that is how I got into Cambridge: no entrance exam, no interview – I just had to receive my brother’s faint approval and pass two Advanced levels.

I spent my first year (Part 1 of the tripos) studying French and Russian. But Part 2 would have entailed doing Old Provençal and Church Slavonic, which I didn’t fancy, so I switched to Law.

I have little to say about the course, for the more interesting parts of my life took place in my spare time and the vacations. For example, on 4 November 1956, I attended my first political rally – the anti-war demonstration in Trafalgar Square, where Aneurin Bevan made one of the most stirring public speeches that I have ever heard. And in Whitehall I saw for the first time how the police initiated violence against demonstrators.

In December 1956, I went with the university ski club to Saas Fe in Switzerland and was picked for the team to race against Oxford – an annual event. We went to Zürs in Austria in 1957 but I dislocated my ankle in practice and so missed the race that year.

In the long summer vacation of 1957, I organised a Cambridge group to attend the 6th World Festival of Youth and Students in Moscow, attended by 34,000 young people from 130 countries. After my national service as a Midshipman Special (i.e., as a sort of British spy), I had to pay a visit to the Admiralty in London to get permission to go. I was interviewed by a commander in Naval Intelligence, who told me to keep my eyes open and report back to him with anything of interest. Like the Naval Intelligence officer who briefed me when I visited Leningrad with the British Home Fleet, the commander also warned me about honey-traps: “If they get you, they’ll have your balls off, Walker; they’ll have your balls off.” I told him that I’d be careful but did wonder why British intelligence was so obsessed by Russian women.

We went by train through Berlin, Warsaw and Minsk, spending two days and nights on the journey. We had a great time when we were in Moscow but there was an unfortunate consequence: the 1957 flu pandemic had started earlier in the year and was spread all over the world as the festival-goers returned home. I myself didn’t know much about the railway journey back to the UK, for I caught the virus and spent a lot of the time stretched out on the floor of the train sweating it out. I suppose that I was lucky not to have been one of the 2,000,000 people who died.

There was another consequence to this trip. In the Michaelmas (autumn) term in 1957, the University Ski Club, of which I was now Secretary, was approached by the students of the Kraków equivalent, who wanted to arrange an exchange visit: we would go to Poland at Easter and they would come to Britain in the summer. We agreed to the proposal and I set about getting a group of skiers together. One person who wanted to come with us was a Canadian, who had already accepted the offer of a job in Canada with a firm making equipment for the American military. He didn’t want to jeopardise the job, so he wrote to his father, a high-up Canadian civil servant, to ask his advice: should he go on this Polish trip? Back came the answer: “Don’t go: the trip is being organised by a known crypto-communist.” So the British Secret Service had passed my details to the Canadian Secret Service (and got them wrong!).

Another instance of this silliness occurred a little bit later that year. My father was a GP and one day Charles, his partner in the practice, was in the surgery seeing patients when a man in plain clothes walked in and introduced himself as a sergeant in the police Special Branch. “Why does your partner’s son write so many letters to people in the Soviet Union?” he asked. “For example, what does this passage mean?” and he showed Charles a translation of a letter that I had written to one of the pen-friends that I had made when I was in Moscow. “I don’t know,” Charles replied. “You’ll have to ask him yourself.” The sergeant left, telling Charles not to tell anyone about his visit, but Charles told my father, who told me. And I never got a visit from Special Branch myself. It would be interesting to know what fantasies they hold in their files on me now.

Anyway, back to the Polish trip. We went by car, travelling through Germany and Czechoslovakia. We were rather late crossing the border into Poland, where the leader of the Polish students (Jurek) was waiting to welcome us. We needed to buy petrol for our cars but had no Polish money, for it was forbidden to take Polish currency into or out of the country. “Not a problem,” said Jurek and he took us to the bank manager’s house and, although it was nearly midnight, knocked on the door and asked the bank manager to open the bank and exchange our money. So, the bank manager threw trousers, jacket and coat over his pyjamas, opened up the bank and cashed our travellers’ cheques.

Then for petrol. There was no petrol station open but the bank manager told us that we could refuel “unofficially” at a house just round the corner. The petrol was in a big drum with a hand pump on. Remarking on our foreignness, the old guy pumping the fuel asked, “Amerykański?”

“Ah,” he said, “fuckin’ Tommies!” But that was the only English he knew.

Another way to get Polish currency was via the unofficial route: trading. Before the trip started, I went into Marks and Sparks and over to the ladies’ lingerie counter. There, I alarmed the young assistant by asking for a dozen pairs of knickers, a dozen bras, nylons and other such items. Then, one day when we were going skiing at Zakopane, I took all this stuff into the café at the top of the cable lift and started to lay it out on a table. There was an immediate rush from all the Poles there and I sold everything for many times more than I had paid for it. The money I made meant that the whole group, Brits and Poles, were able to move out of the youth hostel in which we were staying and into a hotel in Zakopane.

Every summer vacation, I had to do a fortnight of national service. I didn’t think that there was much point in doing top-up Russian courses, so I joined the University Air Squadron as Pilot Officer Walker and learned to fly. I wish that I’d been able to keep my pilot’s licence valid when I left Cambridge but my future career didn’t give me the opportunity.

So I can say that I have been in the army (as a cadet at school), the navy (for my national service) and the RAF.

“Step by step towards rejoin”

"Step by step towards rejoin"