How many more variants of concern are we going to see? 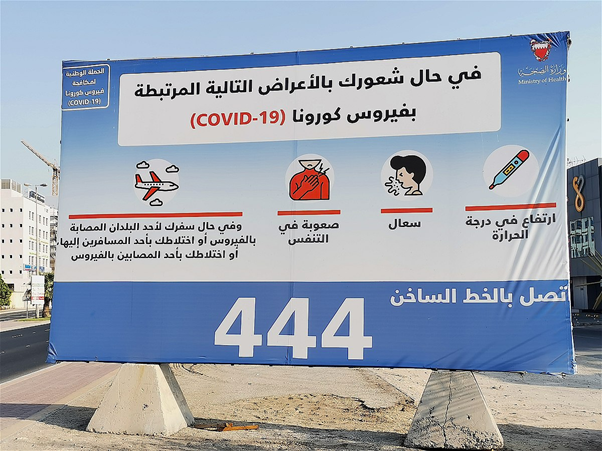 Covid-19 banner in Bahrain: leading in the vaccination campaign has not prevented a new wave of cases. Public health measures are still required. Photo from Wikimedia Commons

The number of Covid-19 infections has been increasing since the implementation of step 3 of the “roadmap out of lockdown” on 17 May. On 14 June Boris Johnson announced a four-week delay in implementing step 4.

We need to reduce the restrictions that have an impact on the economy. However, a complete return to normality may not be possible. Not even in four weeks’ time, as we may not achieve the critical percentage of immune individuals that is required for herd immunity.

Firstly, 21% of our population is below the age of 18 and is not currently vaccinated. Then there is an additional 5-10% refusing the vaccine. Finally, although the vaccines give a high level of protection against severe infection, 12% of Pfizer vaccine recipients and 40% of AstraZeneca recipients do not currently get protection against symptomatic infection with the new variant, according to a recent study from Public Health England (PHE).

There are gaps in our infection control strategy, that have allowed the delta variant to become rapidly the new dominant strain. According to the Independent SAGE, there is still inadequate support for isolation: this means many symptomatic individuals do not self-isolate.

According to the 10 June PHE weekly report the largest number of outbreaks now occurs in educational settings. The general secretary of the National Association of Head Teachers has accused the government of having responsibility for the rise of cases in schools with their decision to remove the use of face masks from 17 May.

How many more variants of concern are we going to see? Some scientists believe there may a limited number of mutations that increase the ability to spread ad evade immunity: thus, the Covid-19 virus might have already played its best cards. However, there is no certainty about this.

Nobody has a crystal ball that predicts the future, but we can learn lessons from the present. There are five countries leading in the vaccination campaign. However, only Israel has been able to suppress the number of new infections (see Table).

There are a number of explanations for Israel’s success. They mainly used the Pfizer vaccine, which may confer a higher level a protection against symptomatic infection, and almost everybody has received a second dose. In the earlier phases of the unlocking Israel used a vaccine passport scheme: this has recently been withdrawn but the use of face masks in closed public spaces has continued. Furthermore, Israel vaccinated down to the age of 16 (not 18 as in the UK) and has now extended vaccination to the 12-15 year old.

Conversely, Chile and Bahrain have experienced a rebound in the number of new infections and deaths. The resurgence in Bahrein has been blamed on large gatherings during Ramadan, and might have been facilitated by a lower protection rate with China’s Sinopharm vaccine.

In Chile, the resurgence of the infection has been blamed on a “reckless rush to reopen”, but might also be related to the use of China’s Sinovac vaccine, a vaccine whose efficacy at preventing symptomatic infection seems to be just over 50%.The UK and the US risk repeating the experience of Chile and Bahrain.

Possibly getting closer to ‘normality’?

The main objective of our government is to reduce the number of severe infections resulting in hospital admissions. However, controlling the number of new infections is also important, and  the risk of the emergence of variants escaping vaccine immunity increases with the number of infections.

There are two initiatives, currently under consideration, that may take us much closer to “normality”: the vaccination of 12- to 18-year-olds with the  Pfizer vaccine and, possibly, a Pfizer booster in Autumn targeted at variants. Across the world, much of the vaccination will take place in 2022 and this will be critical in reducing the threat of new variants arising in other countries.

Our government has so far played up expectations for political reasons, but what we need is an honest assessment.

Pride in the UK: Bylines podcast

Pride in the UK: Bylines podcast