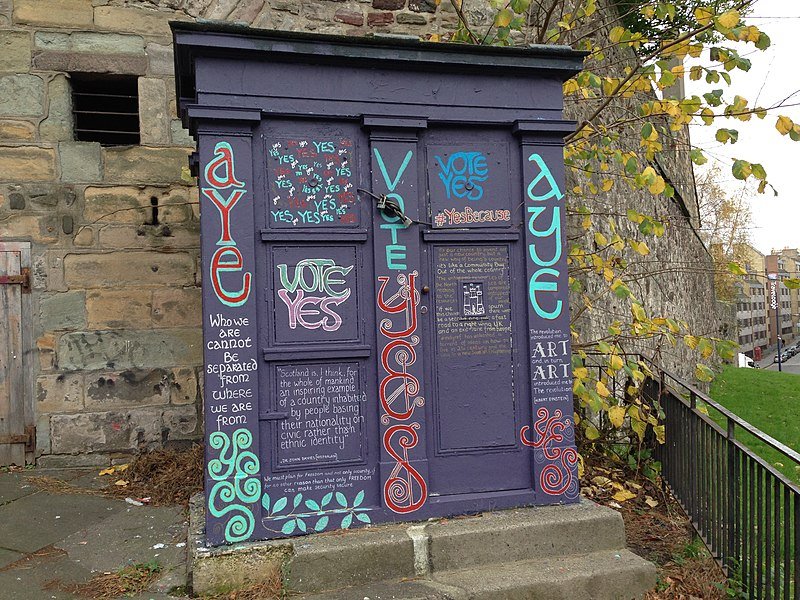 Sturgeon announces an indicative ballot on Scottish Independence. There are howls of protest, but Johnson stands to gain from it. Labour is in a much more difficult position.

Boris Johnson tries to block the ballot, but it goes to the Supreme Court, and the SNP wins. Victory for Johnson – the courts are interfering in the proper business of government and their power needs to be curtailed. Enemies of the people.

In two small corners of Scotland, meanwhile, there is turmoil. These corners are occupied respectively by Scottish Labour and the Scottish Conservatives. The corners have just got a whole lot smaller following the SNP’s landslide victory at the polls.

Douglas Ross, leader of the Scottish Conservatives, has said right from the outset that his party would boycott the indicative ballot. No one pays much attention, because in order to keep the party alive, it has had to become the natural party of Brexit, which in Scotland is slightly less popular than bubonic plague.

A win for Johnson, because it means that he doesn’t really have to do anything except denounce the ballot as undemocratic to his audience in England, while Ross is landed with the job of trying to do the same in Scotland.

In the other small corner, however, what is left of Scottish Labour is in a state of complete anarchy. They know that whatever they do, they lose face. If they support the ballot, there is the prospect of unleashing the wrath of Starmer, the withdrawal of support by Labour in England, and never getting on TV. If they boycott it, they become a laughing stock – once again, as in 2014, when the chips are down, the Labour Party is handmaiden to the Tories.

The SNP uses its hands-down victory in the poll to pressurise the government in Westminster into granting a section 30 order to hold a referendum. Johnson tries all the obvious tricks – offering a date in 2030, demanding a 75% majority, making a vow; but doesn’t get away with it, and the referendum goes ahead. Does the Yes vote prevail? Probably.

So, who wins? Johnson wins. Whether or not this is also a win for the people of Scotland depends on your point of view. Yes, that’s correct. Johnson wins regardless of the outcome. More of that later.

First, it’s necessary to look at why it’s reasonable to expect the pro-independence faction to win. Which involves examining what motivated those who voted No in 2014. Two groups in particular are pro-union by conviction, and these are the Scottish Conservatives and the Orange Order. It’s a conviction that’s possibly borne more of loyalty to the crown than anything else; a sort of old-fashioned patriotism. But their combined vote is nowhere near the 55% who voted No in 2014. So what motivated the rest?

One clear motive was caution – scepticism about the highly optimistic economic growth figures of the pro-independence movement, and the lack of clarity around details like currency. And their manifest risk aversion is not unreasonable. But there is also another reason, much less tangible.

In a country of only 5.5 million people, a separatist movement is susceptible to accusations of parochialism: separate Scotland from the rest of the UK and it becomes a small stage, inward-looking and isolated, on the edge of Europe; a place that people with ambition leave behind.

But if the charge of parochialism ever really applied in Scotland it was removed suddenly in 2016, when England’s Brexiters embraced it with extraordinary enthusiasm and made it their own. Scotland can take its proper place in Europe, while its southern neighbour enjoys the mirage of Global Britain.

So the proponents of independence hold more cards than they did in 2014. The would-be unionists, on the other hand, have a mountain to climb. For Johnson the carrot could only be a) Brexit is a good idea, and b) we’ll make lots of concessions to Scotland, trust me.

And the stick: now that we have Brexit you can’t leave, because trade with England – on which your economy depends – will be made much more difficult, and if you attempt to rejoin the EU it will become harder still. The mayhem you see today at Dover, you will see tomorrow in Coldstream. He may find the Scottish electorate is now less susceptible to that kind of intimidation, however.

We also have to question whether the UK government will be able to muster such a range of supporters to its cause as Cameron managed in 2014. At that time we heard from major retailers, the oil companies, financial institutions, all of whom urged voters to support the union. It will be interesting to see how many of them, post-Brexit, will be as willing to lend Johnson their voice.

To add to the difficulty, and this is where Labour has a key role: the 2014 referendum was won, not through advertising and TV appearances alone, but in millions of conversations had by ordinary people all over the country. In 2014, Labour had an army of activists in Scotland who canvassed for a No vote. It also bussed people in from elsewhere to help out. In the next referendum, Labour can count only on the canvassers it can import. All of which makes the Yes vote more likely. But of course, nothing is certain.

Possible outcome 1. Win for unionists. Johnson successfully fights off a rebellion and unifies the country. Starmer is on the winning side, his activists have done all the canvassing, but Johnson gets the credit. Johnson wins, Starmer is the also-ran.

Possible outcome 2. Win for separatists. Johnson, despite his best efforts, is defeated by a bunch of whinging anti-democratic quislings, who are basically all welfare scroungers because everyone knows that English taxpayers bankroll Scotland so we’re better off without them. Defeat feeds the beast.

Starmer, despite his best efforts, is defeated. He sent as many people as he could muster up to Scotland to speak to people on the doorstep to try to talk them round; but he couldn’t really get enough volunteers so it was just a drop in the ocean. His message that people should just relax about Brexit and embrace the idea of citizens’ assemblies to create a more equitable society has impressed no one. He wanted to show that he had a vision for the future, but has ended up demonstrating that he’d just hurriedly picked up an idea from Gordon Brown’s think tank and tried to give it the hard sell. He looks weak, shallow, and out of touch.

So how come it’s lose-lose for Labour? Here are a few key points.

The Labour Party has had to be dragged into showing any interest in constitutional issues. Gordon Brown, Starmer’s mentor on constitutional issues, has belatedly made some headlines with it, but he dismisses the separatist movement in Scotland as ‘grievance politics’. In order to do so, he has to turn a blind eye to the fact support for Labour in Scotland has completely collapsed. It has collapsed at least partly because the 2014 referendum pitted aspiration against risk aversion. Labour’s support for the union in 2014 revealed it as a party without aspiration.

Gordon Brown, like many in the Labour Party, can’t tell the difference between separatism and nationalism.

Before he makes too many more casual remarks about the referendum, Starmer needs to learn one unique and crucial fact about Scottish politics, which is this:

Perhaps his credibility would be best served if he just stood well back.

Farage’s new party gets its first councillor in Hartlepool

Waiting for the all clear

Waiting for the all clear