Julia Mazza writes about an amazing bond between North Korea and Middlesbrough. 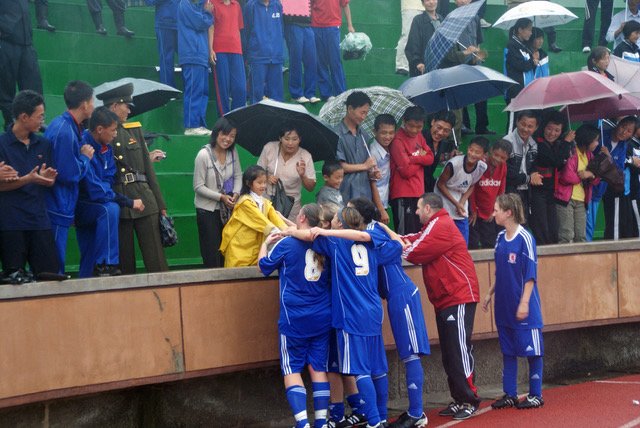 Last year marked the 20th anniversary of diplomacy between the UK and North Korea, officially the Democratic People’s Republic of Korea (DPRK), that final frontier of the Cold War’s Iron Curtain that fell everywhere else some 30 years ago.  In the last two decades of diplomacy, perhaps the most successful move to thaw frozen relations has been a Friendship Tour to the secretive state by Middlesbrough Women’s Football Club.

In 2010 Marrie ‘Maz’  Wieczorek, manager of the then Middlesbrough Ladies’ Football Club, opened an email inviting the team to North Korea. “That can’t be genuine,” she thought as she deleted it. Two months later another email arrived and she checked it out. She tells North East Bylines, “I just said yes, yes, yes. It was such a massive thing. It was a whirlwind thing on the other side of the world. I put it to the girls, they’re all young, late teens or mid-twenties. Three or four didn’t want to go, they’d read about North Korea.” On the possible dangers, “I took the view that the British Embassy wouldn’t allow us to go.” Her one regret was missing the Pope’s visit to Britain.

Not an easy path

Middlesbrough Women’s Football Club did not have an easy path to fame. The club kicked off in 1976 as Cleveland Spartans with women who longed for the privilege of playing the Beautiful Game. Over the years they survived with backing from local sponsors, Boro Electrics, Cannon Sports and Madison Ladies.

“It was always a struggle to be recognised,” says Maz, who was a player then manager for 36 years until 2012. Now she’s Team Ambassador. “We were up against them. Referees said things like “you shouldn’t be here, you should be in the kitchen cooking for your lads.” They reached the Women’s FA Cup Final in 1982.

Yet the idea of inviting this particular amateur ladies’ football team made perfect sense to the British Ambassador in Pyongyang.

A bond between North Korea and Middlesbrough

The story of the bond between North Korea and Middlesbrough, the Iron State and the Rust Belt Town, began with North Korea’s freak qualification to the 1966 FIFA World Cup rounds in England when their only regional opponent was Australia due to political boycotts.

Based at Middlesbrough FC, the North Koreans found themselves adopted by an enthusiastic home crowd.

The historic upset of the World Cup came when the 1000 to 1 outsiders beat Italy by 1-0, knocking the titan Azzurri out of the competition, to the delight of the home fans. “What a sensation!” cried commentator Frank Bough.

Pak Doo-ik scored the goal. At the estate now covering old Ayresome Park stadium, is a statue of his boot on the exact spot where he’d kicked the winning ball.

Then on to the quarter finals in Liverpool, followed by thousands of Boro supporters, where they lost 5-3 to Portugal and their legendary striker, Eusébio.

A film about the experience

Nick Bonner of Beijing-based Koryo Tours, which arranges trips to the hermit state, made a film about the team’s experience, then in 2002 he brought over the surviving players to visit Middlesbrough Women’s Football Club.

In 2010 Nick and British Ambassador Hughes in Pyongyang discussed how to commemorate the tenth anniversary of UK-North Korean diplomacy. Given the popularity of women’s football in North Korea (who knew?) the decision to invite the Boro ladies was easy. The costs were covered by an Asian sponsor.

In all, 14 players and three managers went, for four hectic days in September 2010.

A trip to North Korea

Maz was startled at the barrage of publicity. “I was [teaching] PE in school. One day I came out of school and the cameras were there. When we came back I had 75 texts from people all over the world. When I look back now it was crazy.”

Their hotel was in an isolated sports complex 15 minutes outside the city. They never left the capital but were ferried across it in their team bus. They couldn’t explore the city alone or speak to people in the street. They had agreed to leave their phones at the airport.

“I never felt threatened, scared or frightened”, says Maz. “We had two Korean guides who spoke better English than us, and the driver .. and a few English people with us all the time, like Nick.”

In a schedule packed with receptions, visits and the mass Arirang show, the team played two games. They lost both, to crack sides as good as Arsenal Ladies at their best. It was a good result for diplomacy though. (When China was warming up relations with North Korea their sports policy was “friendship first and competition second” and they threw every game.)

Their first match was against the national team. After the 6-2 result, recalls Maz,  “we ran around the track and clapped hands to the audience. They were throwing things down to us – packs of cake in cellophane. We kicked some balls into the crowd to keep and they threw them back! They were leaning over and saying ‘thank you’ and ‘thank you for coming’ in English.”

The entire North Korean population watched the game on their village communal TVs.

The second match was against an army team called ‘April 25th’ in which they lost 5-0 in the rain before a crowd in wet clothes clutching brollies.

After each game the sides met up at the hotel, playing pool, drinking beer, singing karaoke and mixing , helped by the interpreters. “All the girls were intermingling and you’d see this anywhere in the world” says Maz.

They took part in a school training session. You can see their keepy-uppy on YouTube. Says Maz: “They were dead good with what they have. We gave them new footballs. It was so nice.”

They met eight veterans from the 1966 World Cup. “They said how warm the people had been …and there’s a place in their hearts about the Boro.”

Nick tells North East Bylines, “Without it wanting to sound like a Disney fairytale, I do strongly believe in the power of cultural engagement. ..and just seeing the faces of the North Korea students who watched Middlesbrough Women’s FC …was enough to see the power engagement has.”

It’s not Disney, it’s Sports Diplomacy, a governance strategy now used worldwide. According to the US Bureau of Educational and Cultural Affairs:

“Sports diplomacy uses the universal passion for sports as a way to transcend linguistic and sociocultural differences and bring people together.

The Friendship Tour took place against the backdrop of a drive to bring North Korea in from the cold. South Korean premier Kim dae Jung’s Sunshine Policy of 1998 to 2010 aimed to mollify the North with famine aid among other efforts, but after a change of government in the South the strategy was declared a failure in 2010. In the North, Kim Jong-il died in 2011 and his son Kim Jong-un assumed power. The new leader consolidated his rule with further human rights atrocities, and the military overspend leaves the population starving.

The state has developed nuclear capability, carrying out tests that bode ill for the future.

In 2017 South Korea reinstated its Sunshine Policy with so far successful moves towards easing tensions. At the 2018 Winter Olympics in South Korea, North and South fielded a united women’s ice hockey team.

A UK Sports Diplomacy policy could dovetail with the South Korean approach.  But while regime change in North Korea has made engagement harder, Britain has failed to develop the Boro’s half-century of community groundwork to advance the cause of peace.

The Friendship Tour’s follow-up petered out. The managers were invited to two receptions at the North Korean Embassy –  a three-bed semi in Enfield- and the North Korean Science Minister visited Middlesbrough once.

A 2012 return visit by the North Korean women’s football team was scrapped due to the lack of a sponsor. A football project for this year to celebrate the 20 years of diplomacy, with FCO backing but no money, suffered the same fate. Then came Covid-19 and the closure of all North Korea’s borders.

We can only hope that the UK government will eventually pick up the ball and run with it, stumping up the cash for a serious Sports Diplomacy policy.