In part 5 of this North East history series we look at ventilation, attitudes and profit in the coal mines. 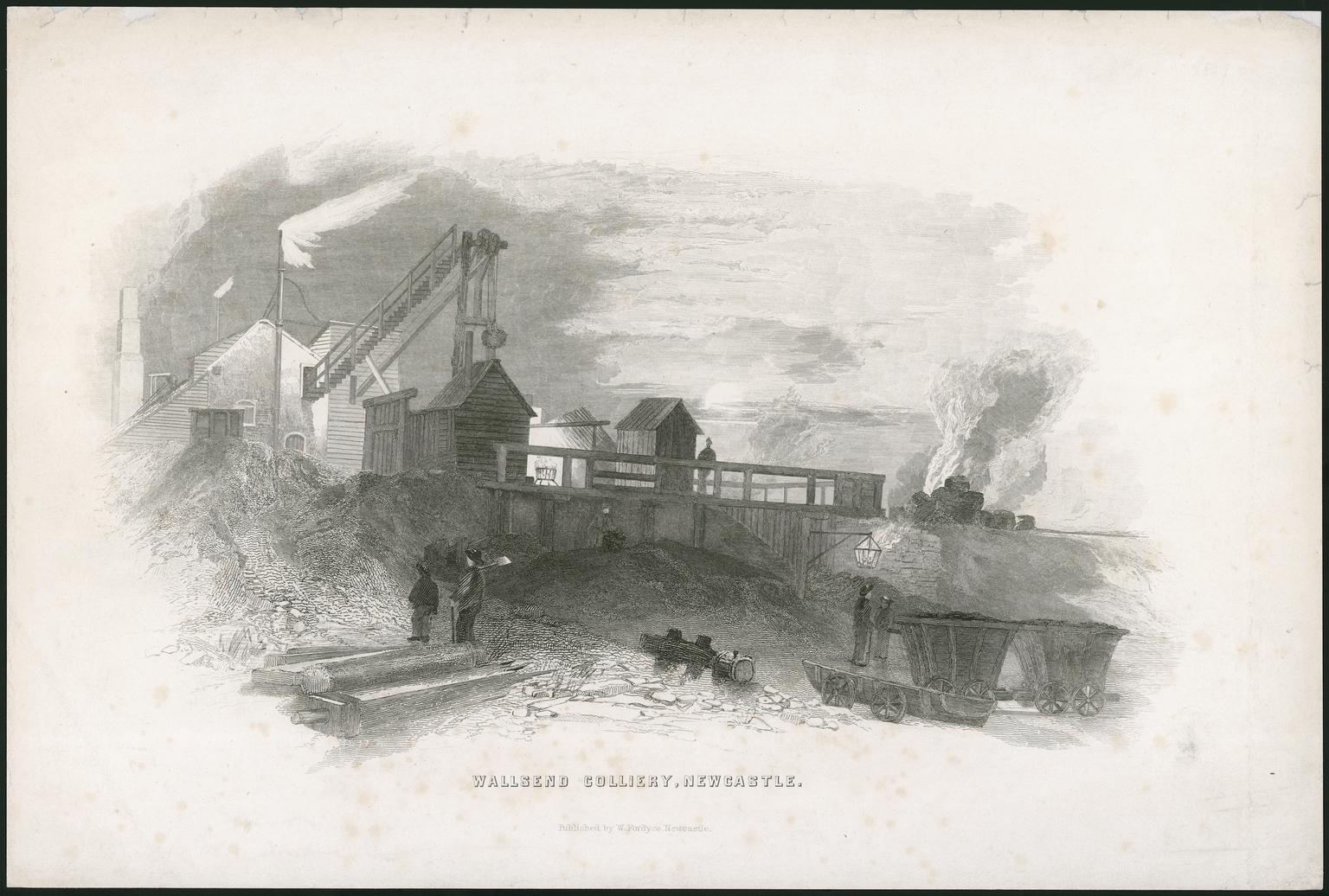 print. etching. 'Wallsend Colliery, Newcastle' / published by William Fordyce in "Coal and Iron," 1860, pirated from the original plate of T.H. Hair's "Sketches of the coal mines in Northumberland and Durham." 27 x 40.5 cm. Copywork.

Unfortunately, the invention of the Davy lamp in 1815 directed attention away from ventilation and led to the erroneous idea that it was perhaps not quite so important after all. It is true that Buddle’s system was generally adopted in the northern mines but for a variety of reasons including cost, ignorance, negligence and sheer apathy it was frequently badly done. This fact is borne out by the findings of the Government Committee of Enquiry into the Causes of Accidents in Collieries. This report published in 1835 states that:

“The evidence justifies the suspicion that the foul and free air courses are frequently too near each other, the communications are not adequately protected and the lengths of air crossings are excessive, giving opportunities for leakage, interruption and contamination, and the temporary nature of the stoppings, often boards imperfectly united, sometimes mere heaps of small coal – and their frequent derangement inevitably produce dangerous consequences.”

Beyond the safety of ventilation

The miners themselves complained about this kind of slipshod installation too, claiming that:

“In many mines, the air courses are not made with sufficient care nor attended to with sufficient vigilance and caution, in many, the air has to travel too long a distance from the downcast shaft to the upcast shaft.”

Even at Wallsend Colliery, which was generally accepted as being of the better mines.

“Work was carried on to an extent beyond the safety of ventilation, considering the high percentage of gas they represented to produce.”

This was the opinion of a mining engineer, Mr. R. Smith who had extensive experience of mines in Portugal and. Nova Scotia. One might well wonder what he would have said about the safety of the average mine!

By far the most common defect in ventilation throughout the first half of the 19th century was the insufficiency of shafts. George Stephenson was adamant in his opinion that:

“Ventilation of coal mines would be more certain if two pits were sunk instead of one.”

This precaution was however rarely taken. Instead.

“The system in the neighbourhood of Newcastle has been to sink one large shaft and to divide it into two, three or four divisions between the one and the other, being only five inches of wood.”

Stephenson regarded this practice as highly dangerous, and this view was fully endorsed by the Government Committee of Enquiry who found that:

“The practice of placing wooden partitions or brattices in ventilating shafts is to be reprobated; the slightest explosion may remove them, thus the whole system of ventilation is destroyed and no timely aid can be rendered to the temporarily surviving sufferers.”

The latter in fact did happen in the calamitous explosion at Wallsend in 1835 when 30 fathoms of brattice was blown out closing the mouth of the Bensham seam.

The Government Committee gave its considered opinion that in the interests of safety, more shafts were essential. In the light of this, one might reasonably suppose that the owners would sink more shafts. In fact they did nothing. So that when the South Shields Committee published their report in 1843 there was still good reason to deplore:

“the insufficiency of the practice, mode and extent of the general system of ventilation pursued in the northern mines.”

The report went on to warn that if this state of affairs continued:

“there is scarce a single mine with one or two rare exceptions that in a day or hour may not be plunged by some easy contingency into a destructive explosion.”

The failure of the owners to act

The continued failure of the owners to act upon such warnings is not easy for us to understand today. The whole trouble probably stemmed from a totally different attitude over safety precautions to that which we know today.

The owners of the early 19th century felt that they were doing all that could reasonably be expected of them if they provided for ventilation under normal conditions. It just did not seem feasible to guard against unexpected contingencies. This attitude can be seen from Buddle’s evidence to the Government Committee of Enquiry into the Wallsend explosion. He admitted that shafts were sunk as sparingly as possible and agreed that perhaps this did tend to add to the dangers of coal mines. He went on to explain, however, that:

“When gentlemen have expended £50,000 pounds or £60,000 pounds in sinking one pit it might not be convenient to spend £20,000 pounds more to sink another, merely to avoid the chance of any accident that might eventually happen.”

£20,000 certainly was a lot of money but on the other hand many lives were at stake. Also further examination revealed the fact that Buddle was not really certain as to the actual cost of sinking another shaft.

When pressed to give an estimate he was at first evasive and then said that it might cost something upwards of £40,000. Other experts found this figure totally unacceptable, however. Mr Mather, for instance, who had extensive knowledge of mines and was later to be the prime mover in the South Shields Committee gave his estimate as between £5 and £6 per fathom under normal conditions. Mr Woodhouse, another viewer, reckoned between £10 and £20 per fathom on average.

This would mean that a shaft of this size referred to by Mr Buddle should not exceed £2000. Even allowing for differences in methods this is rather a different figure from that quoted by Buddle and apparently it was accepted.

Surely at least this figure was a small price to pay for the safety it would afford the miners especially in view of the huge profits being made by colliery owners as witnessed. In a letter from Henry Grey. McNab MD to John Whitemoor Esquire, MP which reads:

“I beg here to state that there is, to my knowledge, one colliery, viz Wallsend producing outrageous profit to the proprietor [and] that there are one, two or three others that produce large profits.”

Quite apart from sinking new shafts, however, it was a relatively easy matter to improve ventilation at very little cost by using the:

“old pits with which most collieries abound, to the amount of two or even three as upcast shafts; at the bottom of which furnaces are to be affixed.”

In mines where such old pits did not exist, an alternative was to make:

“a drift or excavation in the seam of coal nearest above the working seam…the cost of which would be trifling compared with the advantages resulting from it.”

Existing evidence does then suggest that the failure of owners and managers to provide safe and adequate ventilation in coal mines could not honestly have been put down to either lack of technical knowledge or impossibly high costs, but perhaps rather to inexcusable. Ignorance and to greed.

This was no secret to those who fought tirelessly for safety regulations in coal mines. As early as 1806 an anonymous writer stated that:

“The Insufficiency of ventilation, it is well known, arises rather from the difficulty of steadily enforcing it – than from any physical impediment.”

This being so, there was really only one answer, legislation. In 1842, George Stephenson voiced his opinion on the subject when he told the South Shields Committee.

“It does appear to me that an Act of Parliament might be obtained to have power to cause certain regulations to be attended to in the ventilation of mines.”

This was not to be an easy matter, however. All kinds of obstacles confronted those who campaigned for it. Fortunately for the miners, these men refused to accept such obstacles as insurmountable. Writing in 1837, Fyfe pointed out that:

“If we contemplate the improvements affected by the legislature in regard to factory children, etc, we shall find that the difficulties with which they had to contend in these cases at first appeared as formidable as in the present instance.”