The ‘Breaking News’ that London is moving into Tier 3 has really highlighted how embarrassingly biased and London-centric this country’s media is. 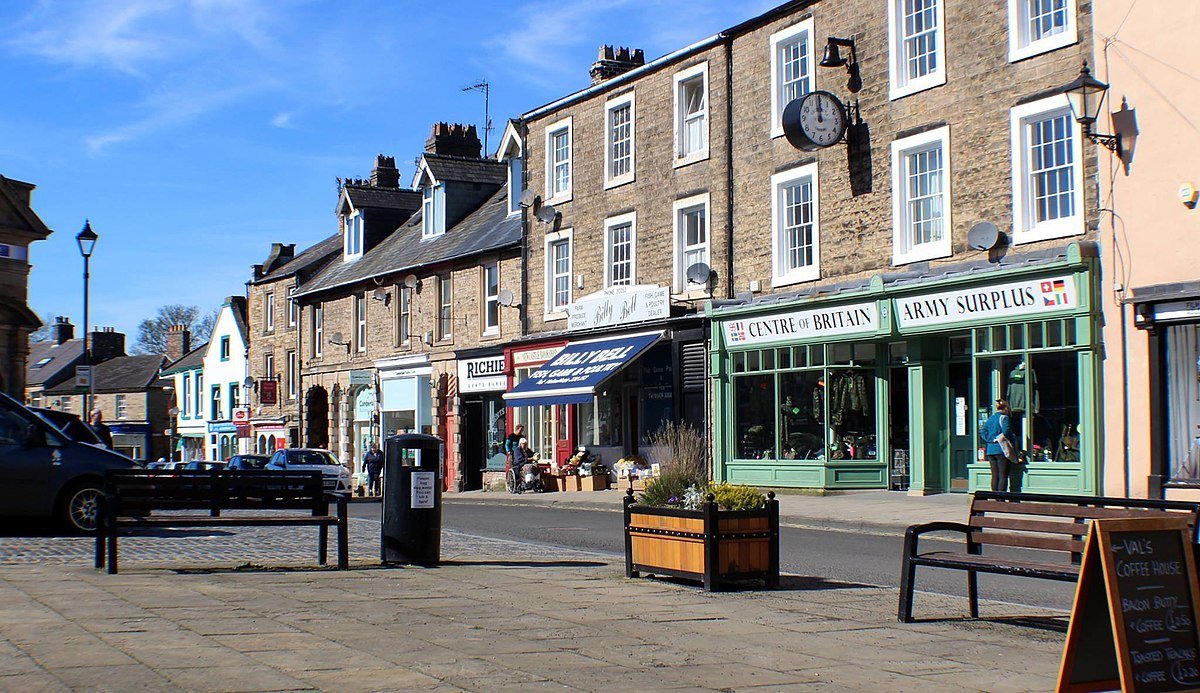 What is ‘The North’? Ask someone who lives in Scotland and their answer will be different from the one usually given in Westminster. It’s all relative! For the purposes of this article, I’m talking about the far north of England, neither the North East nor the North West.

As the government in Westminster reviewed the coronavirus Tier restrictions, I could swear I heard the newsreader on Radio 4 at lunchtime boldly announce that ‘the whole of The North’ will stay in Tier 3. Those of us living near the Heart of Britain will know immediately this is not true: next-door neighbour Cumbria was and remains in Tier 2.

People in Haltwhistle will know this better than most, being in Tier 3 Northumberland but close to the border with Cumbria. Despite being just south of Hadrian’s Wall, Haltwhistle is in fact the geographical Centre of Britain. It’s midway along the longest line of longitude that can be drawn through Britain with its centre on land (from North Orkney to Portland Bill in Dorset), and equidistant from the coast on either side. David Taylor and Grethe Kirkebjerg established the town of Haltwhistle as the official centre of Britain in 1994.

Yet this fact, and indeed Haltwhistle itself, remain relatively unkown. That said, the town has gained some – perhaps unwelcome – local publicity in recent days due to extremely high coronavirus rates. The government’s interactive coronavirus map shows what looks like a small number of cases for the area in the week to 12 December, 100, but when this is adjusted to the small population it gives a rate of 1,422.5 cases per 100,000 head of population (for reference, the coloured scale on the map only goes up to 400+).

Once again, ‘The North’ of England seemed to have been entirely overlooked when a ‘Southern’ ITV reporter @kitbradshaw drew criticism from a Northumberland resident on Twitter for claiming that “Two parts of #Kent now recording coronavirus infection rates of above 700 cases per 100,000”:

@apjilly responded: “When you say 1st and 2nd highest in England, are you referring to LA areas? Just that Haltwhistle in Northumberland has a rate almost twice as high as those”.

But is Haltwhistle still a stereotypical northern town, to blame for its own virus woes due to rule-breaking, as often reported in the media? Not likely. I don’t see reports of untoward actions leading to this surge in cases. Dr Jim Brown, a public health consultant for Northumberland County Council, was quoted as saying “a number of cases” were connected to a single workplace, which the Council was working with. And Northumbria Police confirmed it had no record of any major breaches, such as mass gatherings, locally. Last week the County Council had already begun a targeted engagement campaign to bring down the rate of infections.

Perhaps, instead of looking outside the area for support, people here will have to look closer to home. Besides the Council’s actions, local resident Wendy Bond also reports that small shops in Haltwhistle “have been splendid throughout the pandemic, delivering to all the surrounding villages as well as in the town.”

In North Yorkshire, small business owner Justine McNichol got fed up with anti-North bias and let rip on Instagram:

“I’ve really got a bee in my little Northern bonnet today. The ‘Breaking News’ that London is moving into Tier 3 has really highlighted how embarrassingly biased and London-centric this country’s media is. When the focus was on infection rates in the North, we were branded ‘rule breakers’ and the restrictions deemed ‘too complex for people to understand’. Now that infections are rising in the South East, the focus is entirely on a new strain of the virus and how this MUST be affecting the rise in infection rate. Hours and hours on @bbcradio4 explaining how Tier 3 affects what you can and can’t do. Where was this programming for those in Newcastle who have lived under the harshest restrictions for months? Both the government and media in this country treat the North as if it’s a grey, distant land of simpletons and quite frankly, I’m f****** bored of it. #NorthernNotStupid”

Justine’s post clearly touched a nerve, and after a great response she has set up a campaign and online shop to support a Northern Small Business Emergency Relief Fund. Justine is also producing a series of video interviews with business owners from across the North of England and Scotland who have been severely impacted by the coronavirus pandemic.

What of that other frequent infection route, schools? A recent study shows that Covid-19 cases are actually no more prevalent in schools than in the wider community. Nevertheless, when London was still in Tier 2 restrictions, it was announced that “Mass coronavirus testing is to start immediately for all secondary school pupils in parts of London, Essex and Kent”. A helping hand was extended to schools dealing with infections at a time when “cases in the capital rose to 191 per 100,000 last week, up from 158 seven days earlier.” Meanwhile the schools serving Haltwhistle and the surrounding area have to cope with their own contact tracing, with some deciding to close for several days.

Haltwhistle doesn’t have its own secondary school: pupils travel to nearby towns. In any case, wherever it began and however it is spreading within the town, without a truly world-beating track and trace system, the high infection rate is unlikely to be confined to Haltwhistle. And that, plus the stereotypes, hit remote areas on top of other issues they have faced for far longer.

For example, in sparsely populated areas, services including GP practices are on a relatively small scale. Therefore any sharp increase in calls for their help, or increase in rates of coronavirus or self-isolation among the doctors and nurses who work there, can mean whole practices may struggle to operate as normal.

And there are wider problems, which some in ‘The North’ are beginning to articulate more clearly. The Northern Independence Party is “a grassroots movement campaigning for a referendum on an Independent Northern England. Our party no longer trusts in the ‘generosity’ of Westminster to bridge the centuries old North-South divide.” However distant the possibility of a referendum seems, the party is steadily garnering support with its arguments that, for instance “Poverty has a Northern texture, where public transport is patchy, expensive and infrequent, museums and art galleries few and far between, libraries are closed and town centres have become ghost towns.”

Quite naturally, the place where we live is often the centre of our own concerns – however heavily or sparsely populated, whether it’s in the South or the North. This is a time when ‘The North’ is being redefined. It appears that, especially ‘in these difficult circumstances’, the best people to help us are our neighbours rather than authorities further afield.