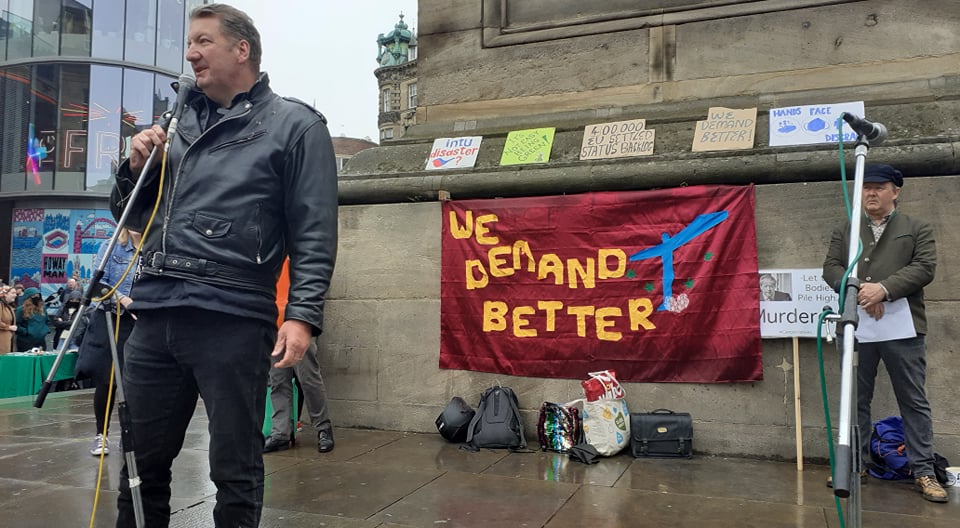 Bill Corcoran speaking at the #WeDemandBetter rally in Newcastle on 26 June 2021 Photo by Ben Chambers, used with permission

There was a real buzz, despite the cold, wet weather at Grey’s Monument last Saturday afternoon. This was the #WeDemandBetter rally organised by North East for Europe (NE4EU).

The event got off to a great start with poet, Harry Gallagher, who performed a selection of his poems to an attentive and appreciative crowd. A highlight was ‘Boris just lies’ which quickly turned into an opportunity for audience participation!

A message from Chi Onwurah

Chi Onwurah, MP for Newcastle Central was going to speak at the rally. Unfortunately, she had to self-isolate, but she sent a strong and powerful message to read out, including the following:

“I am sorry that I couldn’t be here today in person, but I am delighted that you all could be to send a clear message to this Government over our relationship with Europe. Yesterday I represented Labour at the Party of European Socialists (PES) summit. The focus was on promoting young people, women and LGBTQ rights in the face of rising right wing and ensuring the investment to build back better from the pandemic.

“A Labour government will work hand-in-hand with industry and businesses with practical solutions, putting the Good Friday agreement first and the wellbeing of British citizens at the forefront of our relationship with the EU. In opposition we hold the Conservative government to account for the promises it has made and the promises it has broken.”

Bill Corcoran, from the Tyneside Irish Centre, spoke very powerfully about peace and working together. Bill had this to say:

“I’m hoping the friendship people have despite (or because of) different identities is ultimately more powerful than the ‘identity’ fostered upon them by media.

“There was never a saint without a past and there’s not a sinner without a future.”

“Today, I received a wonderful message of friendship and goodwill from the Hebburn Somme Association (basically Ulster Loyalist heritage) about the common memory of the Tyneside Irish Brigade.

“When Brexit is done or undone, we all have to live together and individual friendship and experience will always triumph over politics… I hope the right wing will always be better at playing the divide and conquer game; we need to trump that with what we’re good at. Friendship.”

And Harry Gallagher wanted to thank Bill for his fantastic speech saying:

“I thought he was inspirational, and his message of making peace with people who have differing opinions was brilliantly delivered, with just the right mix of solemnity and humour. Thanks Bill!”

“Climate change is an undeniable reality. Its effects will affect us all. We now need to both constrain (…the rise in global temperature) and mitigate its effects.

The UK government is doing neither.

Their words are superficial and insincere; their actions woefully insufficient. We must change both our own behaviours, and the government.  A government must recognise the threat, cares for our future, and is prepared to take the tough decisions to protect us and the world.

A message of welcome and refuge

The final speaker was Julie Ward, ex-MEP, who spoke with passion and sincerity as always. She celebrated the fact that Newcastle is an inclusive and welcoming place for all. She also highlighted the plight of EU citizens and how difficult, upsetting and stressful the settled status issue has become.

Julie also talked beautifully and movingly about the proposed Immigration Removal Centre for women at Hassockfield, County Durham. She invited everyone there to get involved in the campaign to stop it happening. There is a rally this weekend at Hassockfield.

“What a wonderful day – just like “old times” – outside in the rain and drizzle but listening to voices speaking sense for once! And from so many different perspectives! Where else are you going to get to hear the unbridled passion of an “on fire” Julie Ward alongside a bunch of poems from Harry Gallagher – for FREE!”

The event was hosted by Louise Brown and Yvonne Wancke from NE4EU, a group that has been campaigning over the last five years.

Robina Jacobson, one of the organisers summed up the event beautifully saying:

“It was one of those rare occasions when you wouldn’t have wanted to be anywhere else. It wasn’t until we had heard everyone speak, and were saying goodbye that the Newcastle afternoon drizzle entered our consciousness. At the time, I thought Earl Grey would have been proud to have such a gathering at the foot of his Monument.”