The movement has to get away from seeing Brexit as this binary moment that split the country in two. 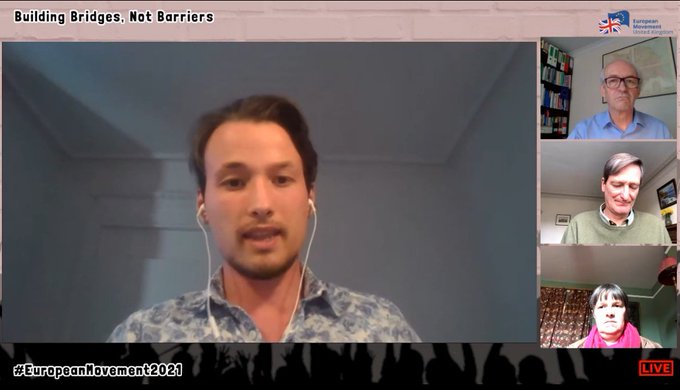 Corbett began saying the UK’s European Movement is the longest standing, pro-EU group, since seeking to join the Coal and Steel Community. It has bounced back from de Gaulle vetoing joining the EEC, and so we will again. However, getting back in by end-of 2022 isn’t feasible. We must keep our voice arguing for rejoin, but realistically it’ll be step by step.

This is a mass movement, Grieve agreed, noting that it wasn’t anything like this in 2016, “I wasn’t involved in 2016!”. But those grassroots seeking to rejoin tomorrow have to be realistic. The two main parties are a ‘million miles’ from rejoining, nor is the EU keen right now.

The movement has to get away from seeing Brexit as this binary moment that split the country in two, “we need leavers to get with us.” And there are ‘stacks’ of Conservative MPs and party members who regret what happened, but who went with the flow seeing no other option, which was and is true for Labour. “We need to appeal to them with practical ideas for the country”: Push for harmonisation over veterinary checks, visa-free travel for certain professions, much greater co-operation on security, and foreign affairs, areas in which the UK Government is “artificially creating barriers to mask our divorce from Europe”. Revive Erasmus. “If we can attract the young, we have a very bright future,” he said, and noted: “There is no permanency in politics, it doesn’t exist. Going into the EEC was not a permanent thing, nor is leaving the EU.”

The impacts of Brexit on fishing, farming, make Molly Scott Cato feel “physically sick”, and for a Government to inflict this so dramatically is “something I’d never thought I’d see a government do. She agreed with Peter Kellner that going forward we would have to ‘connect with Brexit in a way that’s meaningful for people.”

On that, more people are realising we do not live in a proper, modern democracy, due to the failures of the first-part-the-post and the ‘craziness’ of the House of Lords. But there is a hard lesson, especially for those that are grieving, Brexit has happened and our fight is “going to take a long time.” Where in our hearts we will still believe we shall return to Europe, in our heads, “we have to think about the timing and staging of what’s a long road back to European leadership.”

Diversity and inclusiveness must be central to our campaign herein in a country where representation of women, BAME, younger people, working class people, disabled people, the regions has long been so limited. The movement must reach out more to these groups in the coming two, three years, and by so doing, “I genuinely believe we will rejoin the EU and when we do so we must ensure we reflect all the people in our country.”

The Young European Movement represented by Lajtha works to keep European youth engaged with the young in the UK through organising exchanges, seminars, meetings, with political, academic, cultural themes, and teaches in schools about engaging in democracy, empowerment, human rights, the rule of law – where it works, and where it doesn’t, with “democracy under pressure” regarding countries not just in the EU, but outside, like Belorussia, and now the UK.

Personally he never thought the Brexit argument could be lost, “and now we have we’re extremely disappointed”, a misery compounded by this last year of Covid-19 making all the above works difficult to impossible. “Young people are very disappointed and apathetic about politics at the moment,” while others in Europe “take it for granted.”

Noting that what was a strong European movement has fallen apart, now “we must fight this narrative, the UK’s not European.” However, not by the same debate centred around the economics, the negatives, “that this decision was wrong” and become anti-Brexit.org. Instead the battle must be on the positive, the emotional connection with Europe, on the youth. Yes, make people realise how Brexit has affected people. The climate emergency is a common challenge where it is not only essential we work together but demonstrable how we have done so.

So meet with the politicians. Push for proportional representation. Pressure to rejoin Erasmus. Stress the positives and that Brexit and its impacts are things “the whole of Europe cares about.”

Grieve summed it up, saying: “We are a European nation and we will stand and fall with our European partners, and our future is entwined deeper and further than any other country on Earth. We can be proud of our relations with the US and Canada, but Europe is our own neighbourhood.” Getting back into the EU can be done with a grassroots movement, but it “requires patience, determination, and subtlety in picking the issues that matter to people, without just questioning the whole basis of the 2016 outcome.”