Part 3 of Who runs Teesworks? This land was your land. Scott Hunter investigates and lifts the lid on DCS Industrial (South). 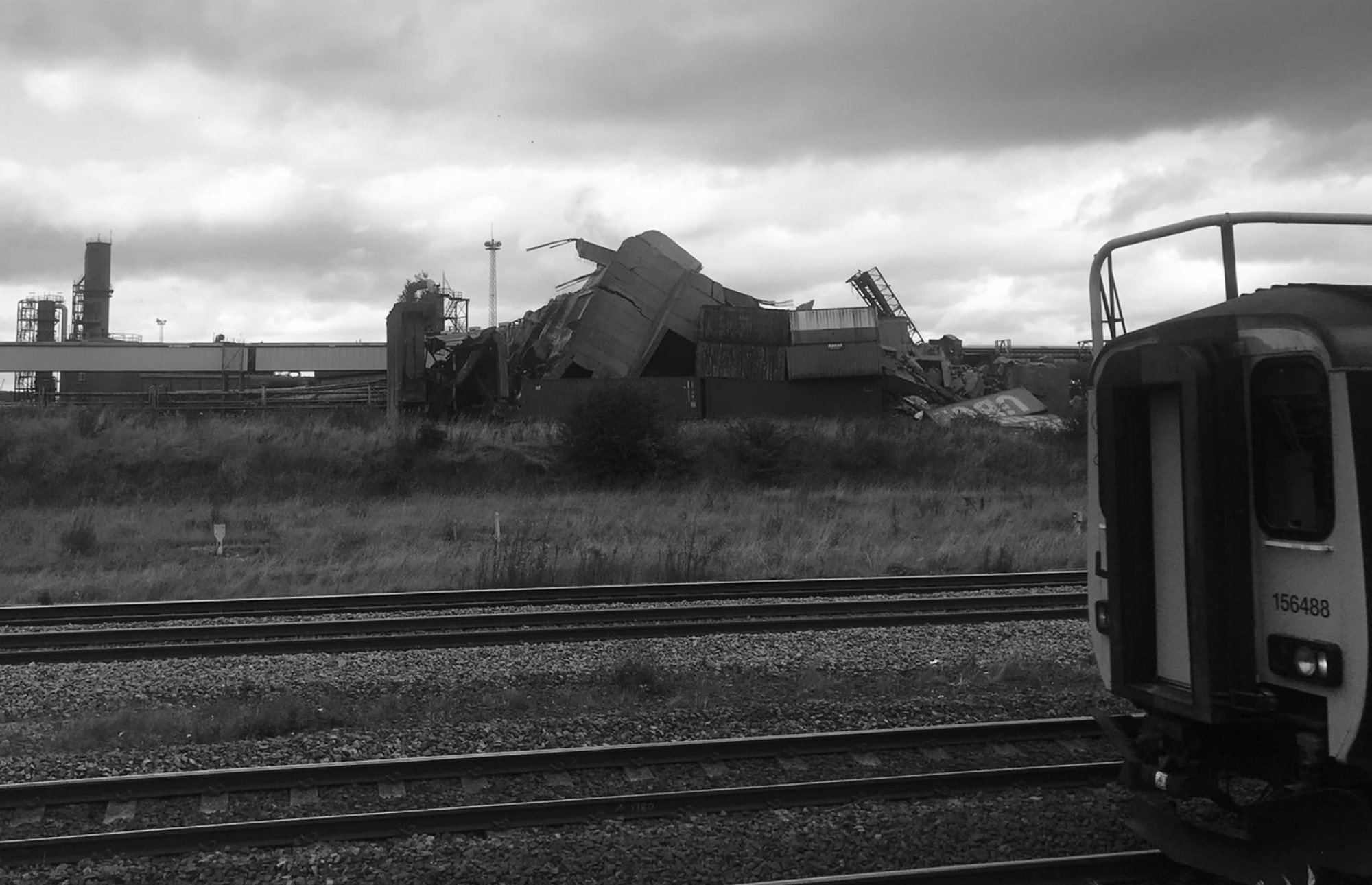 Start with a detail. The diagram shows the governance structure of the South Tees Development Corporation (STDC) as it was in September 2020. The information in the circle is false.

But, so what?  Maybe someone just made a mistake. There are other mistakes in the diagram.  On the other hand, maybe this is an attempt to hide something.

The truth is that the STDC (the Corporation) does not own 100% of DCS Industrial (South) (DCSIS), nor any part of it. It is 100% owned by Martin Corney and Chris Musgrave, the two property developers who, since the end of November 2021, also own 90% of the shares of Teesworks Limited.  Teesworks Limited is wrongly given its previous name – STEL – in this diagram.

We have referred to DCSIS in a number of previous articles, on account of the fact that it its role within the Corporation is entirely obscure.  But in October 2020, Ben Houchen, Tees Valley Mayor was not ready to make public just how much of Teesworks had already been ceded to the developers.

He still isn’t ready, but some of the elaborate tissue of lies on which his empire building is founded has begun to be exposed.

In the paragraph below the diagram, DCSIS is included in a list of ‘organisations involved in delivering the government funded elements of the programme’.  The difference is that the other organisations named there are all publicly owned. That Corney and Musgrave had, by the time this diagram was published, established a joint venture company with the Corporation – Teesworks Limited – does not mean that DCSIS is part of a joint venture (although we have a FOI report from the Corporation that falsely states that it is). It is separate legal entity. Yet it appears from paragraph 4.4.3 that it has access to government funding for its activities, whatever they may be.

But the most eyebrow-raising statement is at the end of the paragraph, where DCSIS is identified as the ‘SSI land owner’. Surely there must be some mistake?  This is the land that the Corporation acquired by compulsory purchase at the beginning of 2020, isn’t it?  Is it possible that the Corporation has sold it on to Corney and Musgrave on the quiet?

And the consequence of that? It makes a nonsense of the Corporation’s business model, which, as we described in Who Runs Teesworks part 2, depends on land parcels being remediated and prepared for sale (leasehold) to client companies to build on, and the revenue is then used to fund further remediation. The lease is also used as security against private sector borrowing and investment.

If parts of the land are sold off before remediation, as appears to be the case with the SSI land, the business model falls apart, as the Corporation cannot fund the remediation and site preparation work.

Thus emerges the £206 million black hole that Houchen recently claimed exists in the Corporation’s funding.  And in comments to the Gazette he insisted that Corney and Musgrave would be filling this gap with a £200 million investment.

On the same occasion he commented that the government had refused to put up this money (a remarkable admission coming, as it did, in the same week that Michael Gove launched the White Paper on Levelling Up).

Two years ago, Houchen and STDC officers presented a case to the SSI compulsory purchase inquiry in which they explained their funding model. The Planning Inspector concluded that

“72. The balance of the evidence before me is overwhelmingly that the STDC model is comprehensive and sound …”

But now it isn’t.

What we found was that the SSI land had indeed been acquired by STDC and registered on 25 January 2021 (the dates of acquisition and dates of registration at the land registry are not necessarily the same. The acquisition appears, from STDC documents, to have happened in the latter half of 2020).

A further application was then received by the Land Registry on 8 March 2021 for each of the three land parcels. That transaction is not yet complete, and the name of the parties involved has not yet been published in Land Registry documents. However, circumstantial evidence we have seen points to this application as involving Corney and Musgrave. And the governance document above indicates that it is in their capacity as owners of DCSIS.

Which may help to explain why a company that is wholly privately owned nonetheless has representatives on the STDC board:

What is not at all clear is what, precisely DCSIS paid for the land with.  Their one and only (unaudited) set of accounts was published in January 2021, showing the company’s net worth as minus £312:

Now, obviously this is an abridged balance sheet, which may help to explain why there’s no sign of the £87,000 that this company was paid by the STDC in May 2020 for either ‘consultancy’ or ‘legal services’ (equally interesting would be an explanation of who provided the ‘legal services’ given that, in this set of accounts, the company is reported to have no employees).  The account is also unaudited, which means that it may not be entirely accurate.

What’s the attraction of the SSI land?

In Who Runs Teesworks? Part 1 we explained that the SSI land is the most contaminated of the land parcels on the STDC site. The funding obtained from the government was intended to cover much of the cost of the remediation (decontamination and demolition) of the STDC landholding. This enabled the Corporation, in 2018, to offer South African company, Portnex, a ‘pie crust contract’ whereby the Corporation would continue to be liable for remediation of the land to be leased.  A precedent set.

Then there is the matter of the assets on the land.  While there are structures to be demolished across the site, the overwhelming majority stand on SSI land. Many of those structures are steel fabrications, and, as we reported recently, we have unconfirmed reports that it is being sold at £6000 per container. Workers on the site have reported to us that Corney spends much of his time there, and appears interested solely in the recovery of scrap metal.

So, who is making money from scrap?  Back to the governance structure diagram.

At the bottom right-hand side of the governance structure diagram is the company STDL. STDL is wholly owned by the Corporation and was legitimately set up to handle the purchase of the Tata landholding, and bear responsibility for liabilities during the remediation process.  It was intended that this company should also be the purchaser of the SSI land, but, in the event, this never happened. Once the former Tata land is remediated and ready for sale, the work of STDL will be complete, and, as stated in the diagram, the land then be transferred to STEL/Teesworks Ltd, now 90% owned by Corney and Musgrave, to be leased out.

Compare STDL’s key responsibilities with those of DCSIS, and there are some significant differences.  STDL owns Tata land while DCSIS owns SSI land and assets, the assets being the metal and aggregates there.  Moreover, the ‘to be transferred to STEL on completion’ is absent.  It appears from this diagram, then, that the assets on former SSI land are 100% owned by Corney and Musgrave, and the Corporation has gained no revenue from it.

So, the Corporation’s revenue from the land is constrained, as more and more of the assets provide income only for the developers.  As that happens its ability to deliver the most expensive parts of the scheme – the development of infrastructure – is limited.

The Dorman Long Tower and Houchen’s dash to Dorries

The demolition in September 2021 of the Dorman Long Tower raises interesting questions about where Houchen’s loyalties lie. He was manifestly furious when the structure was awarded grade II listed status, meaning that Redcar and Cleveland Council could not give permission for it to be demolished. He claimed falsely that a structural engineers’ report had concluded that it was unsafe and beyond repair, and only a matter of days after the listing had been awarded he headed off to London to persuade the newly-appointed DCMS minister, Nadine Dorries, to rescind it.

However, at the time of the demolition, the Corporation, it appears, no longer owned the tower.  The assets of the SSI land belonged to Corney and Musgrave. So, Houchen’s dash to London to meet Nadine Dorries, was to secure permission on behalf of the developers. And as they own the asset, they also own the rebar it contains.

Meanwhile, demolition is classed as remediation work and is paid for by the Corporation.

All of which raises the uncomfortable question of who paid Houchen’s train fare that day.