The last time there was a by-election here, in 2004, it attracted no fewer than fourteen candidates. But even before all the candidates are named, the party has definitely already started. 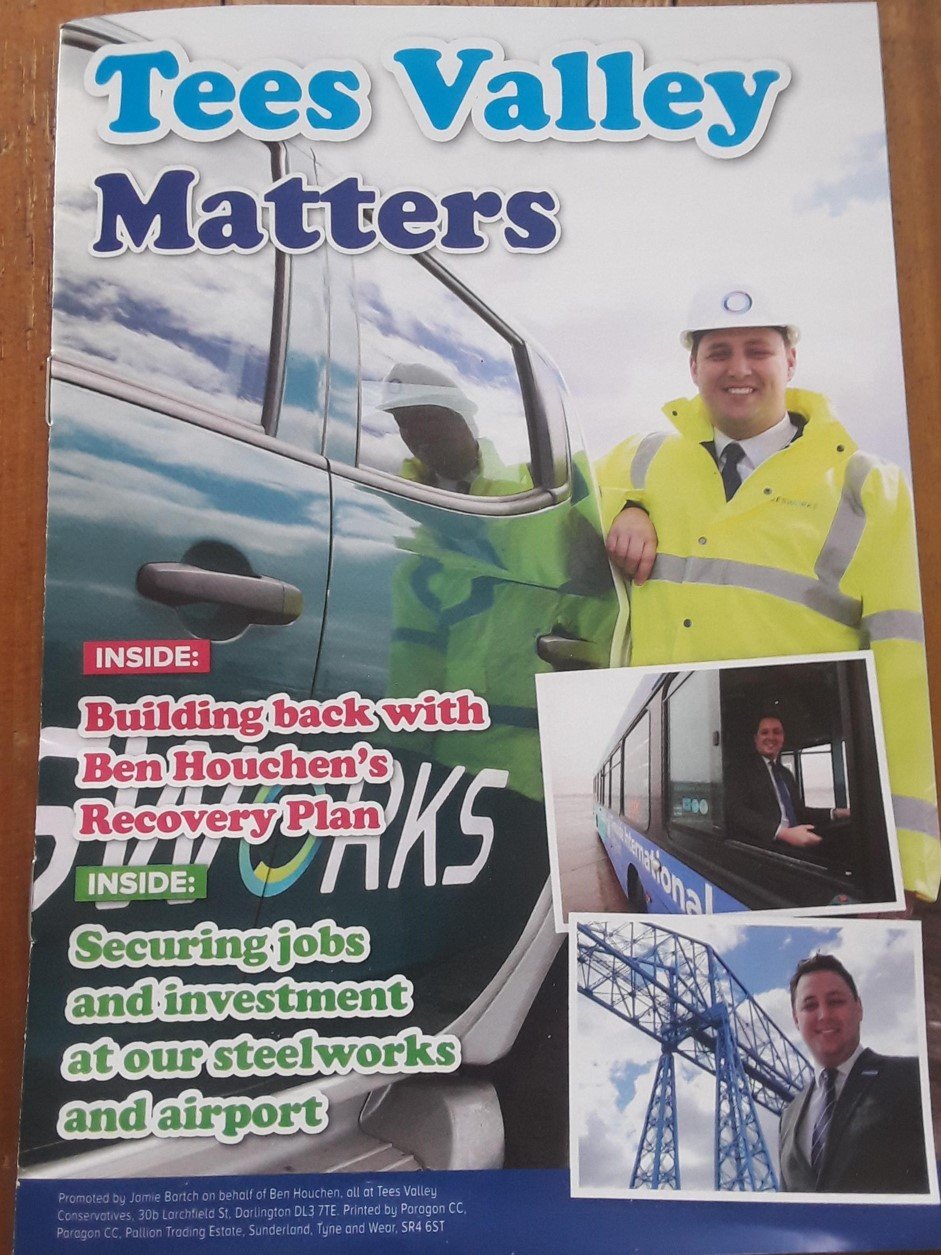 Ben Houchen, Tees Valley Mayor, will be standing beside whoever is the Conservative candidate Photo of magazine cover by Scott Hunter

By-elections can sometimes be a bit lacklustre, a bit of a foregone conclusion.  But we haven’t had one for a long time now, and the next one, coming up shortly in Hartlepool, is set to be absolutely world beating. There is already a Wikipedia page dedicated to it, which makes interesting reading, if not always for the right reasons. At one time an election in Hartlepool was slightly less interesting than the shipping forecast. Not any more. Here is the current state of play, as we understand it.

Richard Tice of the Reform Party has stated that he’s “thinking about standing”, and at one point suggested that the Tories should stand aside to allow him to win the seat. The Conservatives may be currently weighing up his offer, as they haven’t yet announced their candidate. One name has been mooted – Nick Oliver – a councillor from Northumberland, but nothing  more. UKIP, the hitherto unknown Northern Independence Party, and the SDP (yes, you thought it became extinct in 1988, but it didn’t) have also declared their intention to field candidates, although none have been named. Gemma Evans of the Women’s Equality Party (WEP) has declared she will stand, although she has made it clear that the purpose is to put pressure on other parties, Labour in particular, to adopt the policy demands of the WEP. This rather sounds as if she’ll be happy to talk to Keir Starmer, and possibly Lisa Nandy at a push, but no one any further down the food chain than that. Teesside Live  has announced that a local independent, Samantha Lee, will also stand. Finally, Labour has declared ex-MP for Stockton South, Paul Williams, as its candidate. The selection was made extremely quickly and upset some people in the party, and details of an ‘inappropriate tweet’ from 2011 have recently been reported (Williams has apologised), but he remains the candidate nonetheless.

We should point out that elections in Hartlepool have often attracted a relatively large field of candidates, as is also the case with by-elections. Put the two together and the final list of candidates may turn out to be quite bewildering. The last time there was a by-election here, in 2004, it attracted no fewer than fourteen candidates. But even before all the candidates are named, the party has definitely already started.

Tees Valley mayor, Ben Houchen, was out leafletting with Conservative Party deputy chair, Amanda Milling last weekend. Amanda Milling later labelled Paul Williams ‘arch remainer’ in a newspaper interview in the expectation that, in a town like Hartlepool, this will be seen as tantamount to being a serial killer. Of passing interest to us, however, was what precisely was on the leaflets they were delivering, given that the campaign hasn’t really started and they don’t have a candidate. The answer dropped through the letter box here a few days later – yes, it was ‘Tees Valley Matters’, a leaflet celebrating the achievements of Ben Houchen himself.

And even Wikipedia has joined in the fun, with this comment about Williams: “He was labelled a parachute candidate and criticised for his pro-EU record in a constituency that voted to leave the European Union by an estimated 70%”.  Except that the alleged source is an article in Politics Home that does not actually say that, nowhere uses the term ‘parachute candidate’, and in any case was published before Williams’ nomination was announced. At present we have no idea who is the author of the Wikipedia entry.

Whoever is responsible for the Wikipedia entry knows that any reference to a ‘parachute candidate’ is a sensitive subject in Hartlepool, as, at one time, this seat was so safe for Labour that Peter Mandelson, who had no prior connection with the town, could be elected here without difficulty.  The practice is not the preserve of the Labour Party, the Tories do it too, but have never yet had the inclination to do so in Hartlepool. And, oddly, the criticism was not made of Richard Tice when he stood for election in the town in 2019.

The question is, however, as the only major candidate yet to declare, what are Williams’ chances?  We’ll start with things that are in his favour.

In an age where the average politician can talk a glass eye to sleep but can’t make toast or change light bulbs, someone like Williams who’s gainfully employed in the NHS has real credibility. And the NHS is perennially popular anyway, which always helps. The fact that he works, at least some of the time in Hartlepool Hospital makes it even better. So, the ‘parachute candidate’ jibe starts to look faintly ridiculous.

Given that one of Liberty Steel’s plants, currently of closure, is in Hartlepool, Shadow Business Secretary Ed Miliband’s demand last week that the government should step in to save the industry will have done Williams’ cause no harm at all. Many will see any steps the government now takes to rescue the Hartlepool plant, which employs around 250 people, as blatant electioneering. And it has to be said that the recent budget bonanza which saw Treasury jobs and the award of freeport status arriving in the region will have little impact directly on the town.

An electorate in which many remain intuitively in sympathy with Labour may also be encouraged by the arrival of Keir Starmer as party leader. That infighting within the Labour Party appears to have subsided under his leadership will do Williams’ prospects no harm at all.

So, other things being equal, Williams may reasonably expect to retain those voters who supported Mike Hill in 2019. The problem is that Hill didn’t have a real majority at all, as the combined vote of the Conservatives and the Brexit Party exceeded his. And it is well to remember that this was also the case with Hill’s predecessor, Iain Wright, who won the seat in 2015 with similar minority vote share. On that occasion the opposing vote was shared between the Conservatives and UKIP.  So, the decline of Labour in Hartlepool is of some long standing. Can Williams regain some of the lost voters?

Remember there are no polls. No one has ever canvassed the opinion of Hartlepool’s electorate, so there are a lot of unknowns. Amanda Milling clearly thought she had her finger on the pulse when she labelled Williams an ‘arch remainer’ last week, but Brexit is now a done deal. Can Williams still be demonised by branding him arch remainer? And the answer has to be ‘possibly’. Many of the most ardent Brexiters simply can’t live with victory. What is unknown about Hartlepool is the ratio of perpetual malcontents to people who were happy with the outcome of the 2016 referendum and want to move on.

One clue to the continuing influence of the far right is the upheaval at Hartlepool Borough Council in 2019 when a group of councillors who had been elected as independents defected en masse to the Brexit Party, and took over control of the council. What was the reaction from the people of Hartlepool? No reaction. They just left them to it.

If there is a risk that Hartlepool’s electorate will simply carry on the Brexit wars then the opposition candidate needs to encourage people to look beyond that. If Williams pitches himself simply as the safe-pair-of-hands-protect-the-NHS candidate he opens himself up to the charge of ‘heard it all before’, of being safe but lacking aspiration. And snapping at his heels is the Tees Valley mayor, Ben Houchen, who has plenty of aspiration to offer, and who will be standing beside whoever the Conservative  candidate turns out to be.  Some readers may have already spotted that there’s a whole lot of smoke and mirrors in Houchen’s vision of the future of the Tees Valley, and some people in Hartlepool may have noticed that they don’t seem to feature heavily in it, at least at present, but Houchen is nonetheless a familiar face with a big message.

The default setting for the standard Labour candidate is to just attack the Tories and talk about the NHS. That message is unlikely to start a stampede of Brexit Party voters back to Labour. Winning over Hartlepool demands a bit more imagination than that.