VOTING is the most basic form of political participation in a representative democracy like the UK. 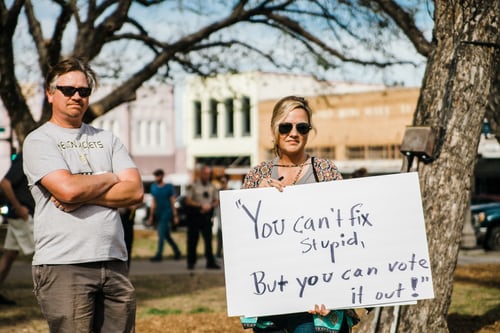 Photo by Heather Mount from Unsplash

VOTING is the most basic form of political participation in a representative democracy like the UK. Yet, voter-turn out has declined sharply since the 1950s – about 80% in the 1951 general election, but fell to 66% in the last election. In the Newcastle Central constituency only 56% of those registered to vote did so.

Amongst some social groups like the young aged 18 to 24, only 46% bothered to vote in the 2019 general election. Yet many teenagers do express some interest in political issues such as climate change, and are prepared to join campaign groups like ‘Black Lives Matter’: a strange paradox. And more 16 to 19-year-olds are studying A-level government and politics than ever before at local FE colleges and sixth forms both in the state and private sector.

Turn-out is even lower in Council and Police and Crime Commissioner elections. Turn-out for the first PCC election in Northumbria in 2012 was a derisory 16%! And in 2019 turn-out for district and county elections was barely a third across England and Wales.

The UK is not alone in this – low levels of electoral participation is a key feature of other liberal-democracies such as the USA, and has been subject to much sociological analysis by experts such as Harvard Professor of Public Policy Robert Putnam in his classic text Bowling Alone.

To many political scientists significant non-voting threatens the democratic legitimacy of any elected body. According to the political analysist, Paul Whiteley ”if this not a crisis of democratic politics in Britain, then it’s hard to know what would be”, while Bill Jones notes, ”worryingly large numbers of people have little faith in the political system”.

There remains today a big debate in UK universities and elsewhere as to why four out of ten of the electorate don’t bother to vote, despite the increase of postal voting to take the hassle out of walking to a polling station which may be over a mile away. It’s generally assumed that apathy is a major cause and that compulsory voting (with non-voters being fined) would help. Let’s consider the arguments for and against compulsion.

The argument for compulsion is quite attractive, especially when other methods of boosting turn-out haven’t been highly successful; such as more postal voting as noted earlier, or voting on-line, or longer polling hours. It’s already practised to some extent in several nations, including Australia, Austria, Belgium and Greece, and seems to work well.

Others have pointed out that if turn-out continues to fall (which is likely to happen in the forthcoming bumper set of elections this May and could be due to the fact that a significant minority of people are not simply on the electoral register), it raises the possibility that extremist parties and candidates will be elected. The far-right For Britain party are fielding candidates in Hartlepool. Likewise, a democracy is entitled to look upon voting as a civic duty for its citizens. Over three-quarters of older people feel it’s their obligation to vote. Social historians like Selina Todd have pointed out that working class movements in the 19th century and the Suffragettes in the early part of the last century were prepared to give up their lives for the right to vote. Many more died during World War Two to preserve Britain’s democratic way of life against Hitler’s fascist drive to take over the whole of Europe. Don’t we have a moral obligation to those millions of people?

Yet many are strongly against compulsion for the following reasons: apathy, it’s suggested, may not be the main cause of non-voting. It could be confusion and lack of knowledge about politics, or the lack of any candidate representing the voter’s views. If apathy is the principal factor behind non-voting, it may not arise from laziness. It could stem from distrust of politicians and the political system. There’s survey evidence to indicate that lots of people have little faith in elected representatives, particularly at national level, partly in response to the expenses scandal which was exposed in 2009 under the Freedom of Information Act by an American researcher. If so, it’s argued we should not blame and punish non-voters, but make politics cleaner, transparent, more relevant, and more idealistic.

Lastly, some writers have pointed out that compulsion is anti-democratic and ill-liberal because it takes away the freedom of choice. But to counteract this view, why not have a box on the ballot paper saying ‘none of the above’.

Overall, in light of the sharp demise in electoral turn-out, the time has come for the UK to adopt mandatory voting with fines being administered to those who can’t be bothered to vote either in a polling booth or by post.