A majority of the electorate aren't actively engaging with local elections nor local representative democracy. 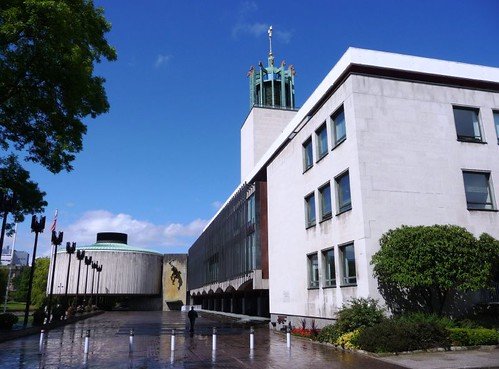 Newcastle Civic Centre" by yellow book is licensed under CC BY 2.0

On 6 May 2021 there are a number of important elections taking place across the North East including elections to local councils, a Mayoral election in Tees Valley, a Police and Crime Commissioner election for Northumbria and a parliamentary by-election in Hartlepool.

There is, however, a big issue in local elections with ‘turn-out’. In 2019 local elections saw a total turn-out of just 34%. Only one in ten young people under 24 voted! But this low turn-out is not a one-off. Turn-out for local authority elections in the last decade ranges between 30% and 40% with the outliers being those local elections that take place on the same day as the general election. In 2015 across Newcastle overall turn-out was 56%.

Choices made by the council have a visible impact on town and city centres as well as on neighbourhoods and local communities. By voting, residents are making sure they have been part of choosing whom makes these key decisions. In addition, local government set the rates of council tax for your particular areas. These rates have a direct consequence on the delivery of public services.

Ward councillors actually represent a much smaller area of people than MPs do. The average Newcastle Ward has about 7,000 electors – that means a single vote is more likely to make an impact on the result.

Although some pundits are predicting a lower turn-out this May than in previous elections, due to health -related issues associated with Covid-19, forward thinking local authorities like Newcastle and North Tyneside have adopted a range of measures to help mitigate its effects, namely encouraging more people to register for a postal vote. To date over 40% of Newcastle’s electors wish to cast their vote in this way. This is good for the health of local democracy and the health of local neighbourhoods.

Sunderland MP helps lead ‘First of its kind’ inquiry into what Northern Culture needs to rebuild, rebalance and recover

Sunderland MP helps lead 'First of its kind' inquiry into what Northern Culture needs to rebuild, rebalance and recover