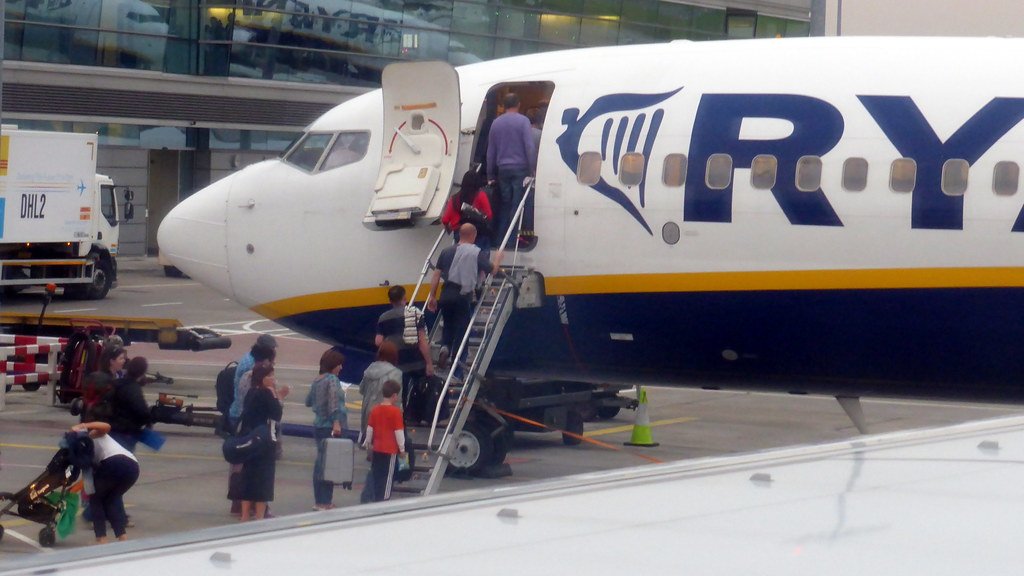 Ryanair is setting up a base in Newcastle " Ryanair" by Sean MacEntee is licensed under CC BY 2.0

Who advises Ben Houchen? You might have supposed that it was the officers of the Tees Valley Combined Authority (TVCA). Until last week, that is. When he announced that he would seek to ensure that a referendum would be required before Teesside Airport could be sold, he crossed a line, and cemented what many had already suspected, that behind him are unnamed political advisers. Unnamed and unaccountable. That is not the work of any official at the Authority.

But these anonymous advisers have direct access to the public through Houchen’s social media accounts. Evidence that their work is not entirely consistent with the values expected of someone in elected office came most recently in a Facebook comment on 5 August. A reader sent us this:

The reader was aggrieved at the false statement about the Labour candidate at the mayoral election who, in reality, did not threaten to close the airport. While that is unfortunate, the beginning of the statement reveals something more worrying about the outlook of Houchen’s entourage: whether he trusts/they trust a hypothetical future mayor to keep the airport open or not, the fact is that this is actually none of his/their business. It is the business of the electorate that votes in the mayoral election. It is for the public to decide if the election platform of any future candidate reflects their views, not the incumbent’s advisors. Does Houchen himself really have the contempt for the democratic process that is expressed in that comment?  Or have his advisors/staff become a law unto themselves?

And is there any reason why those people should have the right to anonymity?  In Downing Street, the advisors are not anonymous. In fact, Dominic Cummings was probably better known to the public than most of Johnson’s cabinet.

A blow to Teesside’s ambition

But Houchen’s zeal for keeping everyone’s attention focused on the airport, has come to back to bite him and his advisors recently. After the embarrassment of Esken’s departure as airport operator came the news that Ryanair was setting up a base at Newcastle in a deal said to be worth £143 million.

Houchen’s reaction to the (7 August) news  must have had many of his most ardent supporters scratching their heads:

“When asked whether the announcement was a blow to Teesside’s ambition to open a base, he said: ‘Our relationship with Ryanair goes from strength to strength. In the short time they’ve operated from Teesside International they’ve not only increased the number of destinations served but also committed to flying all year round, creating our first season of winter sun in over a decade.’”

Didn’t he announce last September that the turnaround had happened and that the airport had attracted a low cost carrier?  And that he had never imagined that this good fortune for the airport would land so soon?  This is how it was reported in November 2020 by Tees Business :

“Securing flights with a low-cost operator was a key part of the airport’s ten-year turnaround plan and has come almost two years to the day the deal was struck to bring the airport back into public ownership.”

So, in 2020, there was no mention of the need to set up a base. When we pointed out in a previous article that the arrival of low cost carriers was much less of a turnaround than it was made to appear, we offended many of Houchen’s supporters. The need for that carrier to set up a base, and not just put on a few flights out of other bases was dismissed by them, despite the fact that this was clearly stated in the report on the airport produced by the consultants ICF and appended to the business plan.

The failure to attract a low-cost carrier to the airport undoubtedly means the following statement is false:

And increasingly criticism of his press releases celebrating the success of the airport has troubled Houchen and his entourage:

Perhaps this is because they read the 2017 ICF consultants’ report about the unlikelihood of Teesside attracting Ryanair to set up a base:

“Ryanair has previously served DTVA while also serving NCL [Newcastle] and LBA [Leeds Bradford], so is not against serving all three markets. The carrier however, has rapidly grown its presence and market share at both airports, and as such is unlikely to reallocate to an airport between two key markets where it is succeeding.”

But Houchen’s advisors, far from levelling with the public and admitting that the airport is unlikely to become commercially viable as long as it relies overwhelmingly on the leisure market (as explained in this article), instead try to demonise their political opponents by branding them as ‘naysayers’.  For many people, the gratuitous use of attack ads such as these, simply serves to diminish the credibility of the ones celebrating the airport’s purported success.

Who pays the piper?

While we may lament the propensity of politicians like Houchen to play games with the public in this way, there is another consideration, which is the question of who is paying for this misinformation?  Of the things that are not made public about the workings of the TVCA there is the question of whether the Ben Houchen who thinks that comments like the following are appropriate,

Is being paid from the public purse (where the comment in question was, ‘why isn’t the airport 100% in public ownership?’)  Just how many Ben Houchens are there?  And how much do they cost the taxpayer?  We have written to the mayor to ask.