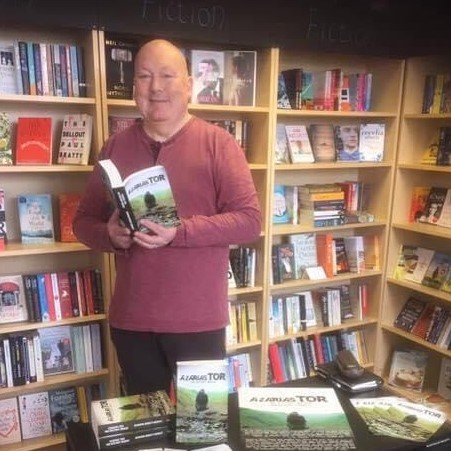 According to Wikipedia. writer’s block is: “a condition… in which an author loses the ability to produce new work or experiences a creative slowdown.”

I am an author of a published novel, Azarias Tor: The History Maker – and will, therefore, be known as an author forever and a day. I might not be up there with J.K. Rowling, David Walliams, Ann Cleeves or Philip Pullman: I have to do a real day job to make ends meet. As a local author, and like Anne Cleeves, I have referenced locations in the North East; Northumberlandia, the Tyne Tunnel, Newcastle city centre, Peterlee, Shincliffe, and two pubs in the region.

Do I suffer with writer’s block? No. Not at all. Never. In fact, I always have something to write but it is not always relevant, and that is why I believe that I might occasionally suffer with, what I now term as, ‘writer’s cramp’.

What is writer’s cramp? I am glad you asked that question but before I give a full response, let me tell you about my first novel, released at the end of March 2017.

Azarias Tor: The History Maker is a story about an ex-police officer grieving the loss of his wife, who discovers that he has the ability to travel through time and space; an inherited legacy bequeathed to him by his father, a time traveller from the distant future. By the way, if you discovered that you had that ability to travel through time and space, affording you the opportunity to save the lives of loved ones who had left this world too early, in spite of the rules and regulations relating to time travel, what would you do? Would you break the rules? Would you change all of history, alter the course of future, to bring back those loved ones you had lost? Take a little time to consider your responses and afford me the opportunity to further the discussion about writer’s cramp.

You see, Azarias Tor was a planned trilogy but I found myself drawn into a world where readers of the book started conversations about a potential movie. The trilogy went on hold and the writer’s cramp began to take a grip as I set out to write the screenplay. Some readers even suggested who might play the lead roles in a potential movie – Chris Pratt, Scarlett Johansson and Donald Sutherland, to mention but a few – and I set off on a two year journey to produce Azarias Tor: The Movie, aka The Nebogipfel Legacy, taking a screenwriting course en route to develop different writing ‘muscles’. The trilogy was put on the back burner as I began to use these newly developed skills, rewriting and editing the potential action movie screenplay, facing numerous rejections, all without explanation, and with some advice I ceased working on the Azarias Tor script upon completing the 20th edit in the spring of 2020. Potential interest from Netflix also ended in a cul-de-sac called because, once again, everything was ventured but nothing was gained. I have not given up the pursuit of happiness, though; having a screenplay produced. This is one symptom of writer’s cramp: not giving up hope!

Time to answer that question – what is writer’s cramp?Let me share an analogy.

Take an athlete from any sport and study their training regime. The athlete focused on 100 metre sprinting will have an entirely different training programme from the athlete who runs 10,000 metres, or the athlete who throws the javelin, the shot put, or the hammer. No, I am not the civil servant, employed by the ‘ministry of stating the obvious’ but if you afford me this opportunity I will attempt to draw a parallel between my predicament and that of my imaginary athletes, who have now changed their training regime to that appropriate to another sport. If the sprinter then prepares for, and attempts, the 10,000 metres, or throwing the hammer, that athlete might suffer from severe muscle cramp. I say might – after all I am no expert on the matter, but I believe that this condition, writer’s cramp, is partly due to myself attempting a different writing discipline, in this case writing screenplay instead of novels. The styles of writing do call for different approaches.

Writing a novel is, generally, a lonely affair until an editor becomes involved in the process. My editor was very kind to me, informing that the book was well written, though she took a while to warm to the names of the characters. Very few alterations were necessary, so the writing of that work of fiction was a lonely journey, unlike the process of moving script from word processor to the big screen, or the little big screen, that large television hanging on the wall! If, that is ‘If’ with a capital I, any of my screenplays – yes, I forgot to mention that I became so distracted from completing the Azarias Tor trilogy that I wrote a number of screenplays for television – so, if any of my screenplays are optioned for development (I should be so lucky) that process may involve a long journey, where many hitchhikers are picked up along the way – script editor, producer, director, and possibly actors – wherein the script may be revised many times, the finished article possibly not resembling the initial screenplay, but I am happy to take that on board – afford me that opportunity.

My recent work has included a six episode TV series about a multiple pile-up on a motorway, and how the lives of those caught up in the incident interacted before and after the event, a four episode TV drama about a married couple who learn that are agnate siblings, a TV pilot about a female ‘Ironside’ and an opening episode for an apocalyptic young adult drama. All that along with the Azarias Tor screenplay.

I do not suffer from writer’s block, but I may have developed writer’s cramp.

You can find Azarius Tor on Amazon. It is also available in many local book shops in the North East.